I Was Drowning In Despair

It’s true. And it was scary.

It happened during my run as a Corporate CEO in the marketplace when I was swept away by hopelessness. I had achieved and acquired “everything,” but was spiritually bankrupt. Even though I had been a Christian for over 20 years, I had not fully committed to God in full surrender.

It was the perfect storm for despair–no joy…constant pain…unrelenting anxiety—and it pummeled me like a runaway truck.

Standing amidst the devastation and chaos, I found myself in Pastor Tom Holladay’s Spiritual Maturity Class 201 at Saddleback Church. And that’s when God grabbed me and jump-started my spiritual transformation. Step by step, I began to trust him more and more. I even started volunteering at the next 201 class handing out guides. Not long after that, I was blessed beyond comprehension when God allowed me to be a teacher in that class–every month for 15 straight years.

After encountering despair and hopelessness as an adult in a mid-career crisis, God had revealed a vivid picture of his healing miracle. It initially floated into my consciousness as a cycle focusing solely on DESPAIR, but later expanded to include a component that introduced HOPE. This nasty foe was defeated through a God-inspired antidote that I developed and have copied below. My prayer is that it will help others, maybe you. 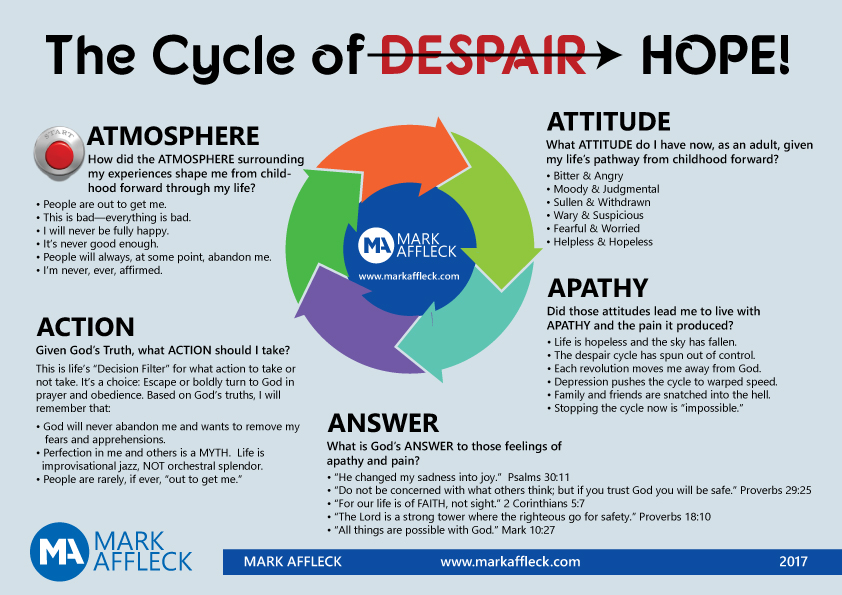