As President and CEO of the organization, I was working furiously to manage our business and loving God was the last thing on my mind. I couldn’t figure out why in the world I was saying “love God fear nothing” when currents of stress were coursing through my soul.I was led to Christ in college in the late 1970s by my life-long best friend Guy Borges, but I was not praying (I didn’t know how), so I know those words weren’t prompted by prayer. I had not just come from a Bible study, so I know that didn’t produce my 4-word epiphany. I know those words not come from a Christian book because I did not have any to read. I also know they did not come from church because I didn’t pay attention when I attended.So, why did love God fear nothing appear as I hit the gas pedal on my 500-horse power sports car and joined the throng of automatons on the 405 freeway in Southern California? I now know that those four words came–from a God I didn’t know–to give my life meaning and purpose. Those words were a trigger from God who grabbed me as I was careening down the world’s “success pathway.” I made it through the board meeting and, no, I didn’t have any spiritual experiences that night. I didn’t even pray. Nope. I didn’t do anything different, even though I knew something was different.

I’ll now rewind the story back to the late 1970s. I roared out of college in 1978 and attacked my business career with a vengeance. Having played football through college and ice hockey from age 4 to 14, I took that competitiveness into my adult life and it wasn’t long before I was hitting success at every turn. At age 35 in 1990, I became President and CEO of a business with $1 Billion invested and $300 million in annual sales.

I said, “I made it!” God said, “Welcome to the world’s stress chamber.”

I found time to attend church through these years in the 1980s and early 1990s, but that was the extent of my commitment to God. During this period of my life, I thought being a Christian meant you were nice to people and prayed if someone was in the hospital. I didn’t have any spiritual discernment. I didn’t have any Godly wisdom. And I definitely didn’t have a relationship with Jesus Christ.

I was an activity management machine with a wonderful “system” for my life, but I hadn’t thought for even one minute about the consequences of my quest. I was so uptight that I couldn’t relax or think about anything not connected to my success goals. People would talk about going to the zoo or a parade and I’d think they had gone mad. I even made church part of my activity management game by taking Saddleback’s Membership Class (101) in 1992.

Then, as incredible as it sounds given my state of mind and heart at that time, the very next month I attended the Spiritual Maturity Class 201. My goal, however misguided when viewed today through the clarity of 20/20 hindsight, was to “endure the four hours and then come out the other end spiritually mature.”

God had other ideas and used Class 201 to dismantle the myths that had formed my flawed view of Christianity. God showed me that day how spiritual maturity was a life-long journey and not a short-term destination. It was actually reassuring to learn that you can’t snap your fingers and “be” spiritually mature.

What happened after that day in Pastor Tom Holladay’s Spiritual Maturity Class 201? In spite of my angst, I decided to subordinate doubt and turn everything over to God. I committed to start practicing the habits of a disciple taught in Class 201—God’s Word; Prayer; Tithing; and Fellowship—and was blessed immediately.

From the mid-1990s to early 2000s, I was blessed beyond comprehension–as a husband, father, lay pastor, and CEO. That change was made possible when God brought me into His inner Sanctuary 20 years ago with those four little words–love God fear nothing—uttered on a sun-soaked morning while driving down a busy freeway in Orange County, California.

I learned a lot about what God says about fear and worry in my CEO years. I then added more learning teaching the spiritual maturity class at Saddleback.

All of that growth was great, but my understanding of God’s Word on fear and worry turned out to be limited and untested until I experienced the “crash” of a lifetime in 2008.

My “faith crucible” came after 20+ years of success as a CEO developing the U.S. avocado category where annual sales skyrocketed from $100 million to $1 billion while I was at the helm.

On my 20-year anniversary, I was recognized by the industry at a four-hour tribute with incredible testimonials of my success. That day was the high point of my professional life.

But what goes up must come down, right?  After the tribute, God called me into full-time ministry to lead Rick Warren’s Global PEACE Plan at Saddleback.

Word traveled through the industry fast and then my “Golden Boy” image came crashing down. Overnight, I became a villain and took on heavy fire about how we had spent grower money.

The assault came as personal attacks—not from my board, but from rebel growers trying to take control of the organization after I announced plans to go into ministry.

It’s still hard, even now all these years later, to fully understand how and why everything happened. That’s the bad news. The good part surfaced as God formed the LGFN message around the life lessons he taught me during this refining trial. Even though the misleading stories will continue to “live” online, the avocado ordeal is having a transformative impact on other Christians.

So that is precisely why I started LGFN—to tell my story of being wracked with fear as a Christian CEO and how God completely changed my life.

The ministry’s heart is an imperative for daily connection with God and life-long spiritual growth--not just at church, but in the real world, too. 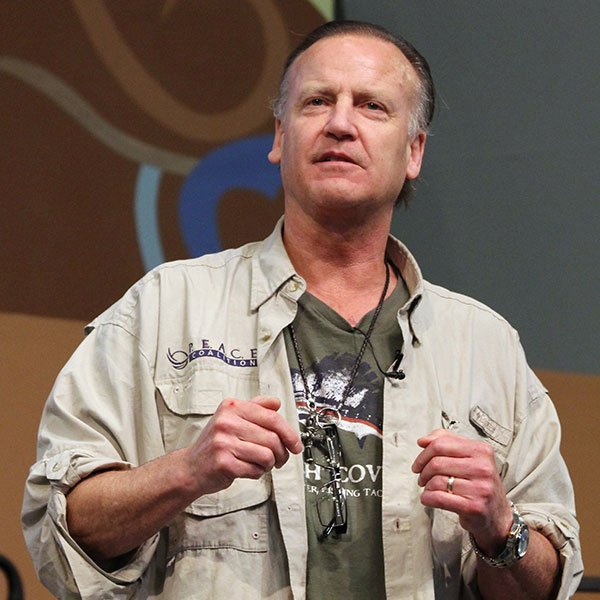 Mark is a CEO-Leader, Pastor, author, and transformative change agent. He founded the Love GOD Fear NOTHING ministry in 2016. From 2013 through 2015 he was President & CEO of YellowChair Strategy (YCS) which helps Churches, Christian organizations, and marketplace companies transform their today in order to arrive alive tomorrow. From 2008 to 2012, Mark was Executive Director of the Global Missions PEACE Plan founded by Pastor Rick Warren at Saddleback Church in Lake Forest, California. Prior to joining Saddleback in 2008, Mark was President & CEO of California Avocados for 20 years. He was the architect of sweeping transformation that produced record revenues. While CEO; the U.S. Avocado Category skyrocketed from $90 million to $1 Billion in annual sales when he retired. Sales of avocados in the U.S. currently total $3 Billion.

Mark has been a member of Saddleback Church for over 35 years.

He lives in Orange County, California with his wife of 44 years, Cindy. They have two children—Evan and Megan—and five grandchildren. Mark played football in college as a defensive back and competitive ice hockey as an adult. He is an avid marlin fisherman and collects fedoras, watches, and television memorabilia. Mark’s book on spiritual growth for Christians – 7 Steps to Activate Your Faith —will be published in 2022. Mark earned degrees from: Pepperdine University, MBA; and California State University, BA Journalism. He completed full course work at Rockbridge Seminary for a Master of Ministry Leadership degree (Capstone Graduation Pending). Mark also completed the following certification programs: Stanford University, Organizational Change; Harvard University, Persuasive Communication; University of Southern California USC, Business Management.