Have You Claimed God’s ENTRY TICKET?

This just in from our global online tribe: “I want to spend time in solitude with God but my life has gotten far from him. I just don’t feel spiritually mature enough. And not good enough. What can I do to fix that?”

At one time or another, and to one degree or another, every Christian has this feeling of being separated from God. Of being inadequate. Of being alone.

That saddens God because he does NOT see it that way.

What does God see? JESUS.

Once we accepted Jesus as our Lord and Savior and began walking with him, our identity was TRANSFORMED. At that point, God started seeing us as NEW and his very own son or daughter.

God’s view of us after salvation is as someone FORGIVEN and REDEEMED. Someone RESTORED and JUSTIFIED. Someone SANCTIFIED and GLORIFIED.

That is our ENTRY TICKET to spend time in SOLITUDE with the Lord of Heaven and earth. We need to stop over-thinking our faith and CLAIM God’s ticket to his inner sanctuary!

This is one of the most powerful aspects of MY OWN FAITH WALK. Coming from a position of feeling inadequate and far from God, I saw that his truth was transforming me. It was palpable and powerful as he escorted me out of the darkness and into his light.

There’s a 5-point guarantee written on God’s ENTRY TICKET to his inner sanctuary:

TWO: He sees us as VALUABLE: “You are fearfully and wonderfully made.” Psalm 139:14

THREE: He sees us as FORGIVEN: “Blessed is the one whose transgressions are forgiven, whose sins are covered.” Psalm 32:1

FOUR: He sees us as RIGHTEOUS: “For by one sacrifice he has made perfect forever those who are being made holy.” Hebrews 10:14

FIVE: He sees us as AFFIRMED: “Therefore, there is now no condemnation for those who are in Christ Jesus.” Romans 8:1

I ask God to keep me from allowing my thoughts of inadequacy or unworthiness from claiming your ENTRY TICKET to spend time in SOLITUDE with him.

Have you claimed God’s ENTRY TICKET to spend time in SOLITUDE with him?

“And we all, who with unveiled faces contemplate the Lord’s glory, are being transformed into his image with ever-increasing glory, which comes from the Lord, who is the Spirit.” 2 Corinthians 3:18 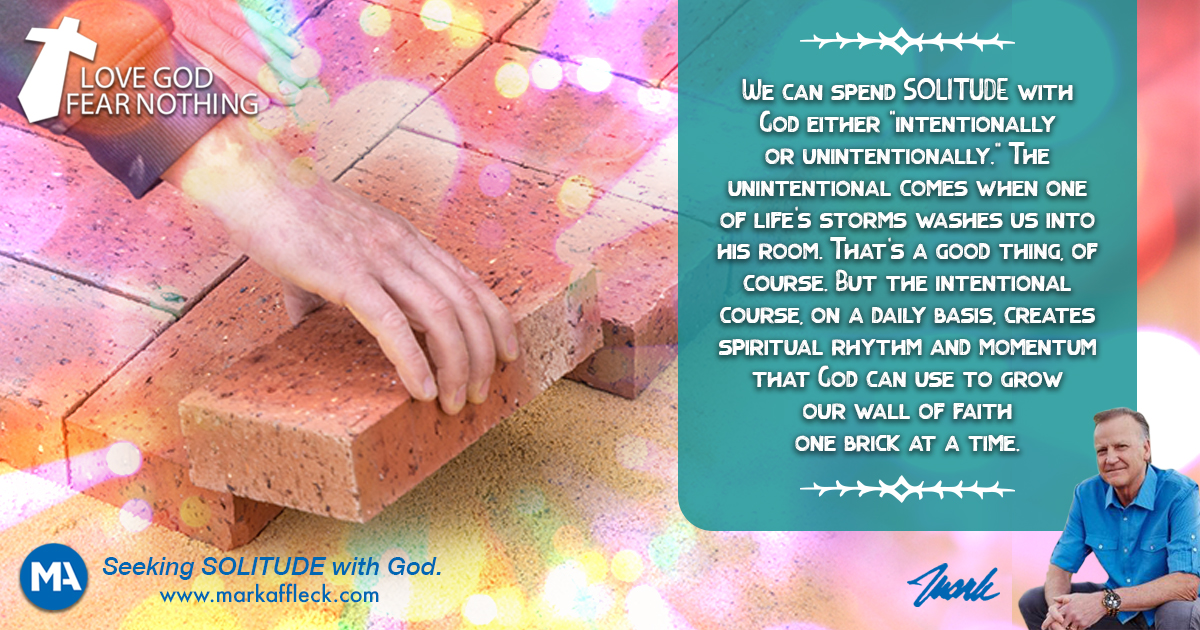 « Does Your Faith Need A NEW BOX?My Dinner Prayer Came Up SHORT…Again »